If you are going to a grocery store, pharmacy or doing other essential shopping in Los Angeles, you need to be wearing a mask or face covering.

Beginning Friday, a new city order requires both shoppers and workers to wear a face covering.

It’s the latest effort by the city to slow the spread of the novel coronavirus. The stay-at-home order has already closed nonessential businesses as well as many beaches, trails and recreation centers.

Here are five things to bear in mind:

1. The idea is to protect both customers and workers

California has been under stay-at-home orders for several weeks, and that limits trips to essential business like food shopping, doctor’s appointments and pharmacy trips.

There has been concern about the potential exposure to coronavirus at retailers such as supermarkets. Many markets have limited how many people can enter and tried to impose social distancing measures in lines.

How Republicans and Democrats Think About Coronavirus

Aaron E. Carroll and Ashish Jha: This is how we can beat the coronavirus

The disparity between the parties was underscored Thursday afternoon when Los Angeles Mayor Eric Garcetti and California Governor Gavin Newsom, both Democrats, issued rapid-fire orders closing down all non-essential businesses, first in the city and then in the entire state, a jurisdiction of 39.5 million people.

This divergence reflects not only ideological but also geographic realities. So far, the greatest clusters of the disease, and the most aggressive responses to it, have indeed been centered in a few large, Democratic-leaning metropolitan areas, including Seattle, New York, San Francisco, and Boston. At Thursday’s White House press briefing, Deborah Birx, the administration’s response coordinator, said half of the nation’s cases so far are located in just 10 counties. The outbreak’s eventual political effects may vary significantly depending on how extensively it spreads beyond these initial beachheads. 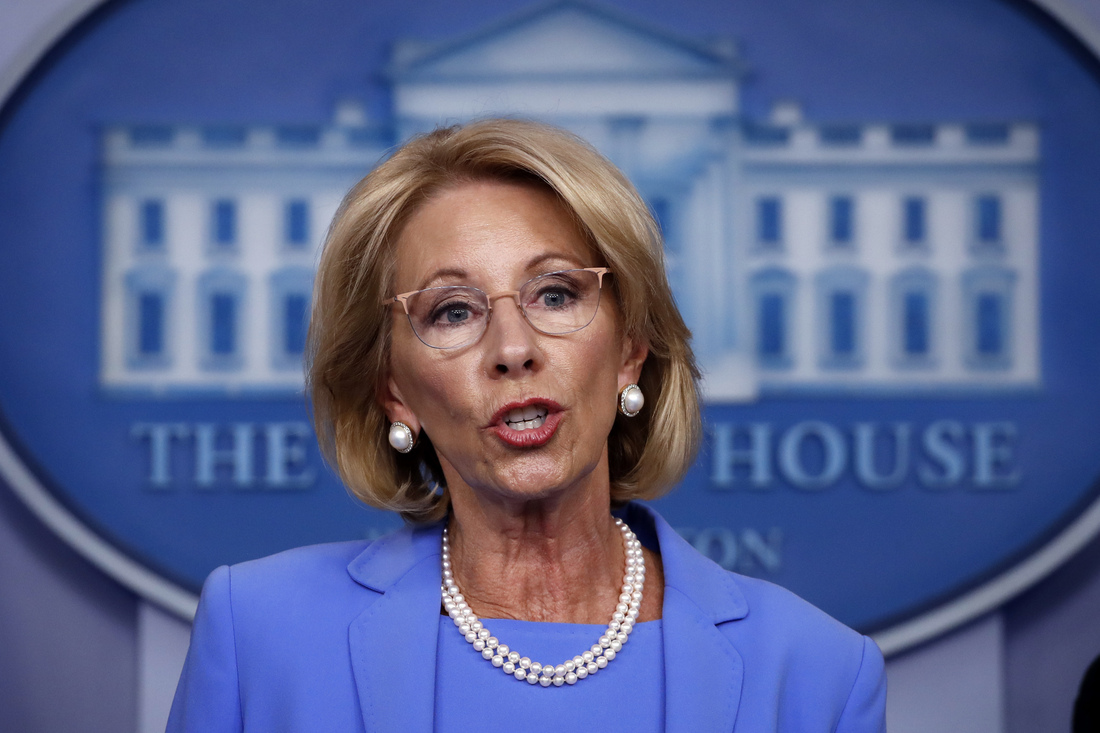 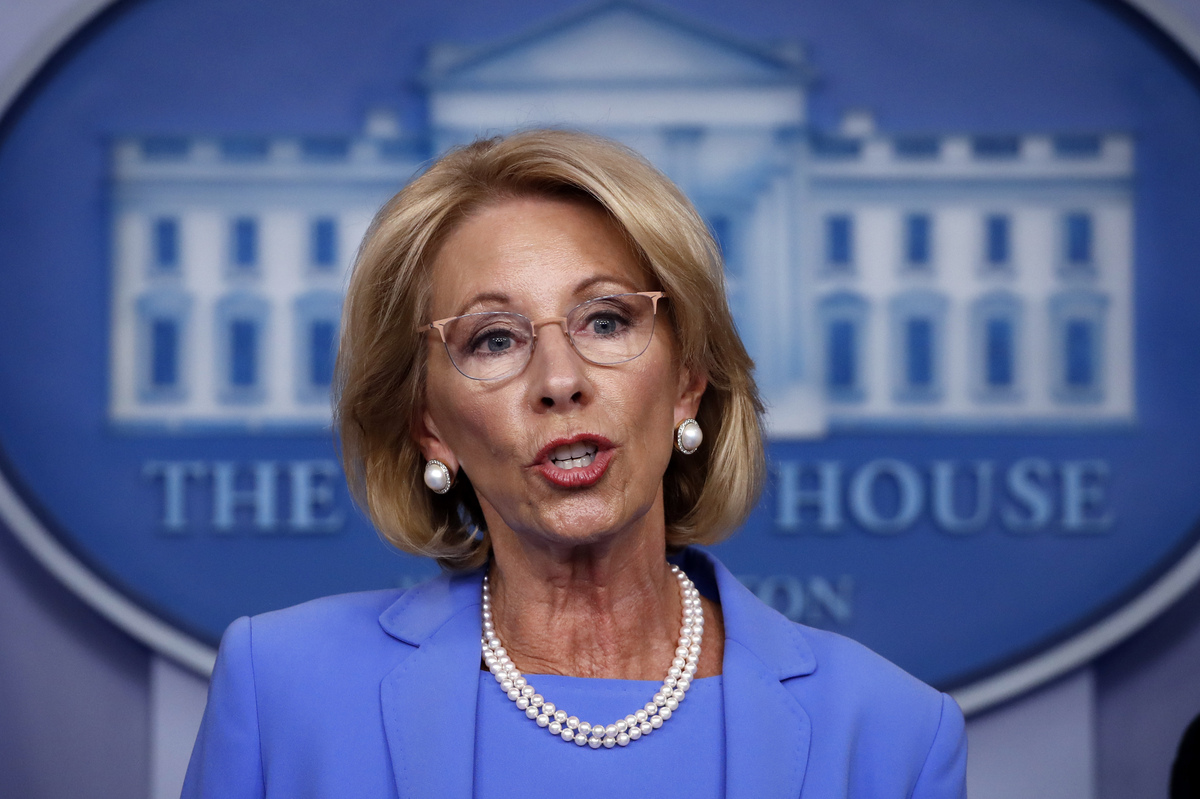 U.S. Education Secretary Betsy DeVos will not recommend that Congress waive the main requirements of three federal education laws, including the Individuals with Disabilities Education Act, known as IDEA. The federal law ensures that children with disabilities have a right to a free, appropriate public education whenever and wherever schools are operating.

When Congress passed the coronavirus relief package, known as the CARES Act, they included a provision that allowed the secretary to request waivers to parts of the special education law during the pandemic. The concern was that holding strictly to IDEA and other laws could hinder schools in the urgency

Despite warnings from health officials that social distancing and the wearing of face coverings can help flatten the statistical curve of nationwide infections, from Texas to Washington state a handful of officers sworn to uphold the law have in recent weeks publicly expressed their opposition to government regulations aimed at keeping citizens from transmitting the virus to others.

The latest high-profile protest by law enforcement came on Wednesday from the head of a Houston police union, who penned an open letter forcefully taking issue with a new order requiring face coverings by anyone in public over 10 years of age, with some exceptions. The order carries a $1,000 fine for noncompliance.

The police union president said that while officers support the public wearing masks, police departments do not have the resources to enforce “draconian” face covering orders. He also took issue with the way he believes such enforcement could negatively

Coronavirus: Resources & What You Should Know

One of our highest priorities is the well-being of our employees, volunteers, donors, partners, and the patients we serve – especially as many blood cancer patients are immunocompromised.

As a health organization, LLS takes seriously our responsibility to help slow the spread of the coronavirus (COVID-19) and protect the communities we serve. As such, we are postponing our in-person fundraising events, and postponing in-person events for patients, caregivers and healthcare professionals. LLS remains open for business, although our offices are closed and our staff is working from home. When possible, we will provide virtual opportunities to continue to drive forward our important mission work.

We are following vigilantly guidance from the U.S. Centers for Disease Control and Prevention (CDC), the World Health Organization (WHO) and local public health officials as we continue to evaluate our plans and

By Angelena Iglesia 4 months ago
The president of Harvard’s Institute of Medicine, Dr. Harvey V. Fineberg, said it’s not a choice between dealing with the disease or dealing with the economy. “We have to do both,” Fineberg told a symposium sponsored by Harvard’s T.H. Chan School of Public Health and the New England Journal of Medicine.
Different parts of the country are in different stages of the epidemic with New York well into the first wave and other places just beginning to see the impact of the disease. This matters, said Caroline Buckee, Harvard associate professor of epidemiology and the associate director of the university’s Center for Communicable Disease Dynamics.

Knowing where the virus is spreading is key to relaxing social distancing and returning to normalcy, Buckee said.

In addition to different parts of the country seeing different disease curves, there are “important epidemiological timelines here where when you become infected you’re spreading the virus, … Read More

Bailing Out the Coronavirus Bailout

“I’ve never signed anything with a ‘T’ before,” Donald Trump quipped at the signing of the $2 trillion CARES Act. He reportedly wants his signature on coronavirus relief checks, as if they were Trump Plaza casino chips. This might be a fitting metaphor for America’s post-virus economic future.

The new bailout bill, which combined with a series of Federal Reserve interventions is more like a $6 trillion rescue, is a massive double-down on the 2008 rescue efforts. This bailout of the last bailout sets the stage for permanent state sponsorship of America’s overheated financial markets.

Like 2008, only more so, the new mega-rescue is a bipartisan effort. Lawmakers sold this as a good thing.

“This is a 9/11 moment,” said Republican congressman Dan Newhouse of Washington state. “A time to put partisan differences aside.”

“We have our differences, but we also know what is important to us,” said House Speaker

This site is regularly updated to give you the latest Coronavirus news, updates and advice from government agencies across Australia.

WASHINGTON (Reuters) – The Trump administration has requested an additional $45.8 billion from Congress to shore up U.S. agencies amid the fast-spreading coronavirus outbreak, a White House spokesman said on Wednesday.

The supplemental funding request, sent to U.S. lawmakers on Tuesday night, would give billions more to the Department of Health and Human Services, the Veterans Administration (VA) and the Defense Department.

The request is separate from the administration’s proposed $1 trillion stimulus package to address the outbreak’s economic fallout.

The request includes a proposal for $13.1 billion for the VA to fund treatment of COVID-19, the disease caused by the virus, and other related costs. The administration is requesting another $1.3 billion for the Centers for Disease Control and Prevention over its prior proposal.