By Angelena Iglesia 3 days ago

Even After Years Of Brutal War, The Allies Were Not Prepared For Buchenwald’s Horrors

By Angelena Iglesia 1 week ago

When Adolf Hitler became chancellor of Germany on January 30, 1933, the world changed forever.

Not only was Hitler determined to pay back Germany’s enemies for his country’s defeat during the Great War, but he was also determined to rid Germany and the rest of Europe of persons whom his twisted Aryan ideology believed were “inferior” or “subhuman.”

Almost immediately upon assuming power, Hitler and his minions began instituting a policy of imprisoning personal and political opponents in special holding centers known as Konzentrazionlagern—concentration camps, or “KL” for short.

At first, abandoned factories, warehouses, and even castles were used to incarcerate the Nazis’ enemies—Communists, Social Democrats, dissidents, and anyone who dared to speak out against the government and its policies. Soon others were added to the list of prisoners—outspoken priests and pastors, men guilty of shirking work, even vagrants. The camps initially were to be “re-education centers,” where those

Reagan activates the Black Ops team, including a mix of old and new characters, to uncover Perseus, an elusive Soviet agent who threatens the foundations of democracy. In real life, Perseus is believed to be a Soviet spy who breached the Manhattan Project and gave the U.S.S.R. America’s nuclear secrets. Their identity was never learned. This game appears to be all about solving that puzzle and filling that gap in history.

“These conspiracy theories almost develop a life of their own, and in some ways, that allows us to add an edge of excitement to our fiction or narrative,” said Dan Bunting, co-head at Treyarch. “And that was a big part of what we wanted to capture in this game, the zeitgeist of not only the original ‘Black Ops’ but in the Cold War era, but also things that are happening today and making it relevant.”

In a press event

By Angelena Iglesia 1 month ago

LA PAZ (Reuters) – The press office of former Bolivian President Evo Morales denounced a criminal complaint of sex abuse as part of a “dirty war” by the interim government against the ousted leader less than two months before the country’s general elections.

Bolivia’s justice ministry this week filed a complaint against Morales, 60, for statutory rape and human trafficking in connection to his alleged relationship with a 16-year-old girl.

“Former President Evo Morales will not comment on the de facto government’s dirty war created for electoral purposes,” a press representative said in a statement late on Friday.

By Angelena Iglesia 1 month ago
By Henry Lubega

Last week, Japan marked the 75th anniversary of its surrender in World War II. It was a war whose impact was felt far and wide, including in Uganda.

Then governor Philip Mitchel had told Ugandans at the start of the war not to worry as they were far from the battle area.

“Do not be afraid. There are Italian forces in Abyssinia but it is a very long way from you people of Uganda, and there are large armies to prevent them from coming here. It is possible, but not likely that you may see an Italian aeroplane or two over some part of Uganda; if you do, do not be frightened. Sit quietly in your banana groves or under any trees until it has gone away. It will do you no harm,” he said in his June 11, 1940, statement.

As a British protectorate, Uganda was

War is a game mechanic in which two nations’ militaries are pitted against each other. As nation leader, you have control over your nation’s military, and must decide what units to build, what battles to execute, and what your overall war strategy is. This manual covers the details of how war mechanics work, and provides insights into the different units, battles, and facets of war.

Wars are based on a system called Resistance. Each side starts the war with 100 resistance and resistance is reduced through every attack or increased through a specific action. The nation that reduces the opponent’s resistance to zero wins the war and the nation that loses gets “beiged”.To 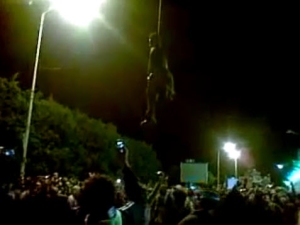 No one should be surprised that many on the American right support military action against the regime of Libyan dictator Muammar Gaddafi. Attacking countries that pose no threat to the U.S. is typically cheered by many American republicans, especially those of the neocon variety.

What’s surprising is that many on the American left support the current aggression against Libya as well—surprising because American democrats typically like to portray themselves as anti-war and anti-imperialist.

What makes the situation in Libya especially ironic is that American “progressives” of the left may, without knowing it, be supporting Libyan rebels who have committed—and may still be committing—atrocities against soldiers and civilians suspected of being aligned with the Gaddafi regime. These atrocities, by many reliable accounts, have included the lynching of black Africans.

Yes, American liberals are throwing their support behind mobs