Reagan activates the Black Ops team, including a mix of old and new characters, to uncover Perseus, an elusive Soviet agent who threatens the foundations of democracy. In real life, Perseus is believed to be a Soviet spy who breached the Manhattan Project and gave the U.S.S.R. America’s nuclear secrets. […]

Reagan activates the Black Ops team, including a mix of old and new characters, to uncover Perseus, an elusive Soviet agent who threatens the foundations of democracy. In real life, Perseus is believed to be a Soviet spy who breached the Manhattan Project and gave the U.S.S.R. America’s nuclear secrets. Their identity was never learned. This game appears to be all about solving that puzzle and filling that gap in history.

“These conspiracy theories almost develop a life of their own, and in some ways, that allows us to add an edge of excitement to our fiction or narrative,” said Dan Bunting, co-head at Treyarch. “And that was a big part of what we wanted to capture in this game, the zeitgeist of not only the original ‘Black Ops’ but in the Cold War era, but also things that are happening today and making it relevant.”

In a press event revealing the single-player campaign, Bunting and “Cold War” senior creative director Dan Vondrak of Raven Software showed off some exciting new changes in gameplay. “Black Ops 4” famously didn’t include a single-player campaign, and the two studios seem to be making up for that with a story featuring a number of familiar characters, including returning “Black Ops” protagonists Alex Mason and Frank Woods.

Treyarch and Raven also seem to be picking up where “Advanced Warfare” left off when it comes to more open-ended, emergent gameplay. The 2014 game (which starred Kevin Spacey of all people) saw a more open-narrow type of level design, giving the single-player campaign a few open areas to navigate with traversal options like a grappling hook. We saw gameplay for “Cold War” in which players infiltrate a Russian embassy undercover as a double agent, picking dialogue paths and nonlethal ways to navigate tense social situations, moving around the complex while ticking off various objectives, all before descending into a classic “Call of Duty” shootout.

“Cold War” seems to expand on this even more with branching story paths, promising multiple endings. Bunting would not say how many, and also didn’t want to promise a plethora of endings. Beyond that, Bunting also promised that “Black Ops” will keep the series identity of being the hallucinatory, experimental brother of the “Modern Warfare” series. They showed off a part of a mission where the team returns to Vietnam, the setting of the very first “Black Ops” mission, where they discover a secret about what happened then, and how it ties the “Perseus” mystery that drives this game.

That mission featured doors dropping out of nowhere, which made for a disturbing, twisted combat scenario unlike anything we’ve seen since “Spec Ops: The Line.” Bunting also said that it’s not the only mission in Vietnam, a tantalizing tidbit for fans of the first game. Another intriguing mission found us in Ukraine, where the Black Ops team finds a secret training facility made to look like an American suburb. The ensuing bloodbath is backed by 1980s pop and neon lights, and looks to be an early highlight for the campaign.

The series also moves us back to a silent protagonist role, one that can be customized to a degree. Players can pick between three genders: male, female or “classified.” The “classified” classification is meant for anyone who might be non-binary or doesn’t want to identify a gender. The “classified” designation is also applicable to other fields in the bio form as well. The thinking from the developers is that rather than forcing players into a decision they don’t want to make, people will appreciate the feeling of being shrouded in mystery and letting their imagination define their character. The developers also rerecorded dialogue to use them/they pronouns for the “classified” gender. Other character options include incidental background details that don’t affect gameplay, like place of birth, and your military background.

“If we don’t find something that somebody wants, let’s let them leave it classified to make the mysterious, shadowy special operative Black Ops character they want to be,” Vondrak said. “So when it came to gender that same thing was thrown out. Why can’t we leave that classified? There’s no reason we can’t do that. We’re already going to change the ‘he’ and ‘she,’ so it was easy enough to use those different pronouns as well.”

It’s unclear how much politics will actually play in the story, but the early reveal and marketing campaign indicates such discussion may swirl around the game regardless of the developers’ wishes. Reagan seems to be a prominent factor, and it’s hard to ignore the fact his policies are still hotly debated, particularly by those on the left, and used to score political points today. Just look at conservative PAC The Lincoln Project, which formed last year as an anti-Trump segment of the Republican Party, and how it continues to weave in Reagan’s words with the current climate and upcoming election.

The former Republican National Convention chairman Michael Steele just joined The Lincoln Project earlier this week, and stated on Tuesday, “I stand where Reagan stood. Where do you stand?” Many of the replies on Twitter indicated that they are tired of mythologizing the most consequential Republican president in modern times and questioned his legacy. Meanwhile, President Trump’s son, Eric, also invoked Reagan’s name in his speech last night at the Republican National Convention.

It’s completely unknown outside the development studios of Treyarch and Raven Software where “Cold War” stands on Reagan or anything political. In a question-and-answer session with journalists, The Post asked them, “Given the real world political climate and prominently featuring Reagan, what considerations did you have in portraying the longtime GOP standard-bearer?” The question was submitted via an Activision-moderated chat, and when relayed to the developers it was paraphrased by a spokesman into, “What considerations did you have in portraying not only Reagan but other real-world people that you engaged in?” The developers gave a general answer about watching “tons” of Reagan speeches and talking to people who were close to him, including former Cabinet members, to get his character right.

Given how the series has treated historical figures, Reagan’s role in the story will likely be benign. The “Black Ops” series caused some controversy for the first game’s portrayal of Fidel Castro, and Cuban state media called the game American propaganda. In the end, players assassinate a double of Castro, who died in 2016. It also invoked the assassination of President John F. Kennedy.

Benign or not, Reagan’s inclusion in the game — as well as 1980s conspiracies about American-Soviet relations — are sure to generate commentary. YouTube personalities and essayists took a shine to last week’s teaser trailer, which centered on Yuri Bezmenov, a Soviet defector who fled to the West and became a prominent lecturer against Soviet Communism and KGB tactics. These essays seem to overreach in tying the current political climate and the anti-police protests to Bezmenov’s warning about allowing “all the schmucks to put a Big Brother government in Washington, D.C. who will promises loads of things, never mind if the promises are fulfilled or not.” It’s unclear whether Bezmenov is a character in the story.

Without more context in the story, it’s hard to debate the accuracy of these readings, but it’s easy to see the gathering clouds of controversy. The politics of “Call of Duty” mostly portray U.S. military interference in foreign policy with little details other than James Bond-ian action and villainy. But even with all watered-down political posturing, war-based video games don’t exist in a vacuum, and have appeared in Russian state media (mistakenly so, they say) to color the conflicts and unrest in Syria.

Infinity Ward, makers of 2019′s “Call of Duty: Modern Warfare,” drew scrutiny for basing a setting in that game’s campaign around an incident in which a military convoy was bombed by American forces. In the script for “Modern Warfare,” however, the Russians were responsible for the attack, angering gamers in that country, including a prominent streamer paid to promote the game. “Black Ops Cold War” is already being touched by the current geopolitical climate. Publisher Activision reshot the teaser trailer by removing the footage it used of Tiananmen Square after public outcry on Chinese social media channels. Chinese conglomerate Tencent also owns a 5-percent stake in Activision Blizzard, who got into hot water last year after banning professional “Hearthstone” players for expressing support for the Hong Kong protests. The move prompted critics to throw “Cold War’s” slogan (“Know your history”) back at the game’s maker.

The story may also paint America in a different light altogether, as the plot is largely driven by a new, shadowy and charismatic character named Russell Adler, a CIA operative that the developers called “America’s Monster.” His early 1980s Robert Redford swagger belies his true intentions and why he’s so adamant in pushing Reagan toward a secretive intervention to find Perseus, whom members of the Cabinet believe to be a mere myth.

Based on what we saw, this is going to be the most explosive campaign yet for “Call of Duty,” which is actually saying a lot considering how much the series has ratcheted up the noise and fidelity. Time will tell what it actually has to say, if anything, about the zeitgeist of yesterday and today.

Tue Sep 1 , 2020
(Reuters) – At least 40 dolphins have mysteriously died in an area of Mauritius affected by an oil spill from a Japanese boat, officials and witnesses said on Friday, as witnesses described the deaths of one mother dolphin and her baby. Environmentalists have demanded an investigation into whether the dolphins […] 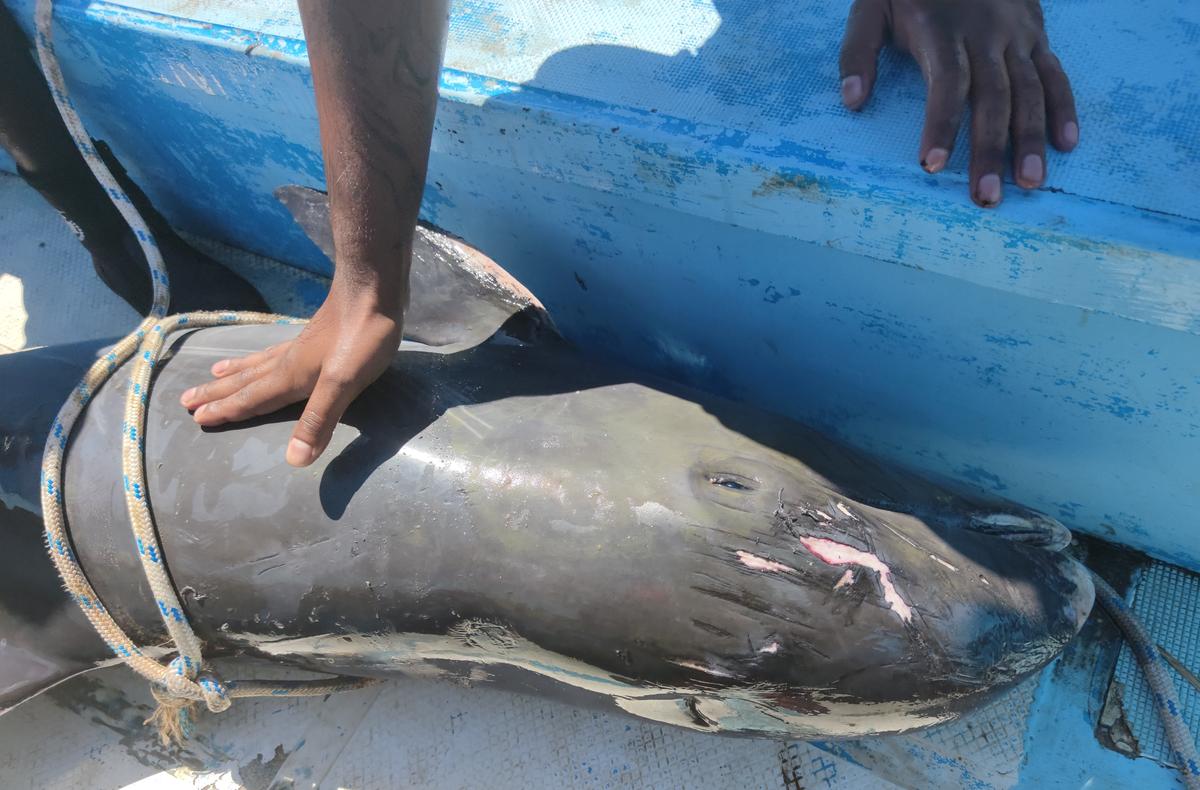