A lawyer for former Bosnian Serb military chief Ratko Mladic told a UN court on August 25 that he was at risk of a “miscarriage of justice” because he was mentally unfit to take part in an appeal hearing on his life sentence for genocide. Mladic has challenged his 2017 […]

A lawyer for former Bosnian Serb military chief Ratko Mladic told a UN court on August 25 that he was at risk of a “miscarriage of justice” because he was mentally unfit to take part in an appeal hearing on his life sentence for genocide.

Mladic has challenged his 2017 conviction and life sentence for genocide, crimes against humanity, and war crimes in the civil war in the former Yugoslavia, including the 1995 Srebrenica massacre.

“I am unable to meaningfully gain instruction from Mr. Mladic, nor be assured that he is able to meaningfully participate and follow” the proceedings, lawyer Dragan Ivetic told the hearing that was held partially by video conference because of coronavirus measures.

He said the two-day hearing that started on August 25 shouldn’t proceed without an analysis of the 77-year-old Mladic’s fitness to participate. At a hearing last month, Mladic’s legal team warned that the former general could be suffering from early-stage dementia.

“It is a denial of due process to sentence or proceed criminally against someone who is incompetent to stand trial,” Ivetic said.

The hearing proceeded despite Ivetic’s objections. Mladic, looking frail, was in court and initially wore a face mask because of coronavirus regulations, before pushing it below his chin and then removing it completely.

Lawyers for Mladic have repeatedly complained about his ill-health, but in a written ruling before the August 25 hearing, judges said that the lawyers hadn’t “substantiated that Mladic is unable to communicate, consult with his counsel, and/or understand the essentials of proceedings.”

The two-day appeal hearing is being held at the International Residual Mechanism for Criminal Tribunals, which deals with cases left over from now disbanded international war crimes tribunals for the former Yugoslavia and Rwanda.

Mladic was captured in 2011 after years on the run. Dubbed the Butcher of Bosnia, he received a life sentence in 2017 for war crimes, crimes against humanity, and genocide committed during Bosnia’s 1992-95 war.

Dubbed the Butcher of Bosnia, he was sentenced to life behind bars in 2017 for war crimes, crimes against humanity, and genocide for his role in the Bosnian civil war in the 1990s.

This included genocide committed by his Bosnian Serb forces in and around the eastern Bosnian town of Srebrenica in mid-1995, Europe’s worst mass murder since World War II, where some 8,000 Muslim men and boys were slaughtered.

Mladic will be allowed to address the court for 10 minutes on August 26.

Mladic had to be removed from the court in 2017 after an outburst in which he accused the judges of lying.

With reporting by AFP, AP, and dpa

Fri Aug 28 , 2020
The US presidential elections have the feel of the popular talent competition, America’s Got Talent (AGT). Like the reality TV show, they are entertaining, emotional and highly competitive, and focus exclusively on the candidates’ talent and character or lack thereof, rather than anything that resembles political substance or agenda. This […] 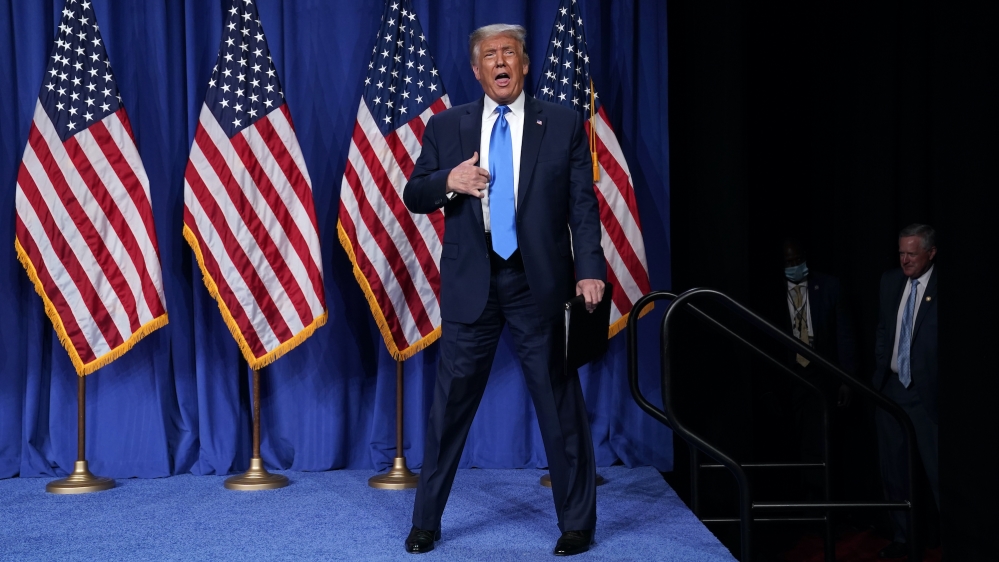