Political system of Switzerland Switzerland is a semi-direct democratic federal republic. The federal legislative power is vested in the two chambers of the Federal Assembly, the National Council and the Council of States. The Federal Council holds the executive power and is composed of seven power-sharing Federal Councillors elected by […]

Cantonal and municipal politics vary in the different cantons, which may have different systems.

The Economist Intelligence Unit rated Switzerland a “full democracy” in 2019.[1]

Switzerland features a system of government not seen in any other nation: direct representation, sometimes called half-direct democracy (this may be arguable, because theoretically, the Sovereign of Switzerland is actually its entire electorate).[2]Referenda on the most important laws have been used since the 1848 constitution.

Amendments to the Federal Constitution of Switzerland, the joining of international organizations, or changes to federal laws that have no foundation in the constitution but will remain in force for more than one year must be approved by the majority of both the people and the cantons, a double majority.

Any citizen may challenge a law that has been passed by parliament. If that person is able to gather 50,000 signatures against the law within 100 days, a national vote has to be scheduled where voters decide by a simple majority of the voters whether to accept or reject the law.[3]

Also, any citizen may seek a decision on an amendment they want to make to the constitution. For such a federal popular initiative to be organised, the signatures of 100,000 voters must be collected within 18 months. Such a federal popular initiative is formulated as a precise new text (general proposal initiatives have been canceled in 2009[5]) whose wording can no longer be changed by parliament and the government. After a successful signature gathering, the federal council may create a counterproposal to the proposed amendment and put it to vote on the same day as the original proposal. Such counter-proposals are usually a compromise between the status quo and the wording of the initiative. Voters will decide in a national vote whether to accept the initiative amendment, the counter proposal put forward by the government if any, or both. If both are accepted, one has to additionally signal a preference. Initiatives (that are of constitutional level) have to be accepted by a double majority of both the popular votes and a majority of the cantons, while counter-proposals may be of legislative level and hence require only simple majority.

Federalism refers to a vertical separation of powers. The aim is to avoid the concentration of power in a forum, which allows a moderation of state power and the easing of the duties of the federal state.

In Switzerland, it is above all a matter of designating the independence of the cantons vis-à-vis the Confederation.

The Swiss Federal Council is a seven-member executive council that heads the federal administration, operating as a combination cabinet and collective presidency. Any Swiss citizen eligible to be a member of the National Council can be elected;[6] candidates do not have to register for the election, or to actually be members of the National Council. The Federal Council is elected by the Federal Assembly for a four-year term. Present members are: Viola Amherd (CVP/PDC), Guy Parmelin (SVP/UDC), Ueli Maurer (SVP/UDC), Ignazio Cassis (FDP/PRD), Simonetta Sommaruga (SP/PS), Karin Keller-Sutter (FDP/PRD) and Alain Berset (SP/PS).

The largely ceremonial President and Vice President of the Confederation are elected by the Federal Assembly from among the members of the Federal Council for one-year terms that run concurrently. The President has almost no powers over and above his or her six colleagues, but undertakes representative functions normally performed by a president or prime minister in single-executive systems. The current (as of 2020[update]) President and Vice President are Simonetta Sommaruga and Guy Parmelin, respectively.

The Swiss executive is one of the most stable governments worldwide. Since 1848, it has never been renewed entirely at the same time, providing a long-term continuity. From 1959 to 2003 the Federal Council was composed of a coalition of all major parties in the same ratio: two each from the Free Democratic Party, Social Democratic Party, and Christian Democratic People’s Party and one from the Swiss People’s Party. Changes in the council occur typically only if one of the members resigns (merely four incumbent members were voted out of the office in over 150 years); this member is almost always replaced by someone from the same party (and often also from the same linguistic group).

The Swiss government has been a coalition of the four major political parties since 1959, each party having a number of seats that roughly reflects its share of electorate and representation in the federal parliament. The classic distribution of 2 CVP/PDC, 2 SPS/PSS, 2 FDP/PRD and 1 SVP/UDC as it stood from 1959 to 2003 was known as the “magic formula”.

This “magic formula” has been repeatedly criticised: in the 1960s, for excluding leftist opposition parties; in the 1980s, for excluding the emerging Green party; and particularly after the 1999 election, by the People’s Party, which had by then grown from being the fourth largest party on the National Council to being the largest. In the elections of 2003, the People’s Party received (effective January 1, 2004) a second seat in the Federal Council, reducing the share of the Christian Democratic Party to one seat.

Switzerland has a bicameral parliament called the Federal Assembly, which is composed by:

The Federal Assembly convenes to elect the members of the Federal Council.
The two chambers are equal (perfect bicameralism). This power-sharing system serves to avoid monopolization of federal politics by more populated cantons to the detriment of smaller and rural cantons.

Members of both houses serve for 4 years and only serve as members of parliament part-time (so-called “Milizsystem” or Citizen legislature).[8]

Switzerland has a Federal Supreme Court, with judges elected for six-year terms by the Federal Assembly. The function of the Federal Supreme Court is to hear appeals of cantonal courts or the administrative rulings of the federal administration.
Switzerland does not have a Constitutional Court, and the Supreme Court cannot comment on law put forward by the parliament. This role is assumed by the people, which acts as a guardian and can repeal any legislation or constitutional change. 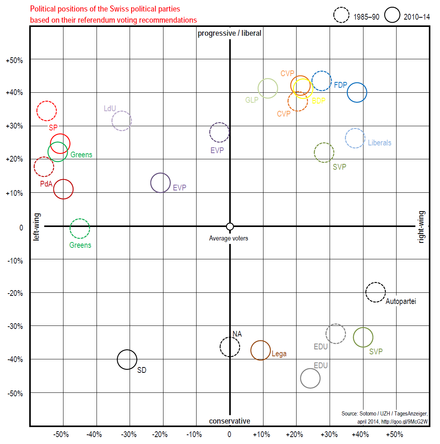 Political positions of the Swiss political parties based on their referendum voting recommendations, 1985-90 and 2010-14

Switzerland has a stable government. Most voters support the government in its philosophy of armed neutrality underlying its foreign and defense policies. Domestic policy poses some major problems, to the point that many observers deem that the system is in crisis but the changing international environment has generated a significant reexamination of Swiss policy in key areas such as defense, neutrality, and immigration. Quadrennial national elections typically produce only marginal changes in party representation.

In recent years, Switzerland has seen a gradual shift in the party landscape. The right-wing Swiss People’s Party (SVP), traditionally the junior partner in the four-party coalition government, more than doubled its voting share from 11.0% in 1987 to 22.5% in 1999, rising to 28.9% in 2007, thus overtaking its three coalition partners. This shift in voting shares put a strain on the “magic formula”, the power-broking agreement of the four coalition parties. From 1959 until 2004, the seven-seat cabinet had comprised 2 Free Democrats, 2 Christian Democrats, 2 Social Democrats, and 1 Swiss People’s Party, but in 2004, the Swiss People’s Party took one seat from the Christian Democrats. In 2008 the Conservative Democratic Party split from the SVP, taking both of their Federal Council seats with them. However, the SVP eventually retook both seats, in 2009 and 2015 respectively.[11]

The Swiss Federal Constitution limits federal influence in the formulation of domestic policy and emphasizes the roles of private enterprise and cantonal government. However, in more recent times the powers of the Confederation have increased with regard to education, agriculture, health, energy, the environment, organized crime, and narcotics.[citation needed]

The Index of perception of corruption puts Switzerland among the least corrupt nations. In the 2005 survey, Switzerland ranks 7th (out of 158 surveyed), with 9.1 out of 10 possible points, representing an improvement of 0.4 points over the past four years.

Together with seven other European nations, Switzerland leads the 2005 index on Freedom of the Press published by Reporters Without Borders (with a score 0.5 points, zero being the perfect score).

Switzerland has avoided alliances that might entail military, political, or direct economic action. In June 2001, Swiss voters approved new legislation providing for the deployment of armed Swiss troops for international peacekeeping missions under United Nations or Organization for Security and Co-operation in Europe auspices as well as international cooperation in military training. The Swiss have broadened the scope of activities in which they feel able to participate without compromising their neutrality.

Switzerland maintains diplomatic relations with almost all countries and historically has served as a neutral intermediary and host to major international treaty conferences. The country has no major disputes in its bilateral relations.

The emergency switch-off button of the Beznau Nuclear Power Plant. In 2011, the federal authorities decided to gradually phase out nuclear power in Switzerland.

The energy generated in Switzerland comprises 55.2% hydroelectricity, 39.9% from nuclear power, about 4% from conventional sources and about 1% other.

On May 18, 2003, two referenda regarding the future of nuclear power in Switzerland were held. The referendum Electricity Without Nuclear asked for a decision on a nuclear power phase-out and Moratorium Plus asked about an extension of an existing law forbidding the building of new nuclear power plants. Both were turned down: Moratorium Plus by a margin of 41.6% for and 58.4% opposed, and Electricity Without Nuclear by a margin of 33.7% for and 66.3% opposed. The former ten-year moratorium on the construction of new nuclear power plants was the result of a federal popular initiative voted on in 1990 which had passed with 54.5% Yes vs. 45.5% No votes (see Nuclear power in Switzerland for details).

In May 2011, due to the Fukushima accident in Japan, the Swiss government decided to abandon plans to build new nuclear reactors. The country’s five existing reactors will be allowed to continue operating, but will not be replaced at the end of their life span. The last will go offline in 2034.[12]