France has moved to reverse a ban on a class of pesticides only weeks after it came into force, reigniting a bitter dispute between environmentalists and farmers and embarrassing politicians who have championed ecological causes under President Emmanuel Macron.  The French cabinet’s approval on Thursday of a draft law allowing […]

France has moved to reverse a ban on a class of pesticides only weeks after it came into force, reigniting a bitter dispute between environmentalists and farmers and embarrassing politicians who have championed ecological causes under President Emmanuel Macron.

The French cabinet’s approval on Thursday of a draft law allowing sugar beet growers to use neonicotinoids was portrayed by ministers as essential to save the country’s sugar industry, the EU’s largest.

“I don’t want to abandon the sector and have my children eating only Belgian or German sugar,” Julien Denormandie, agriculture minister, said in a television interview. Viruses spread by aphids have severely damaged this year’s sugar beet crop in northern France.

Environmentalists, however, are up in arms. Delphine Batho, a centre-left MP and head of Génération Ecologie, a green NGO, rejected the reintroduction of the pesticides as “ecocide, an ecological catastrophe”. Scientific studies have shown that neonicotinoids kill bees and other insects and reduce bird populations.

“We don’t accept that pollinators should be collateral damage,” she said. The real problem is to use . . . a poison which stays in the ground and in the water for more than 20 years. We are mobilising to stop the adoption of this law.”

The row over neonicotinoids is one of several disputes over pesticides, herbicides and genetically modified crops that have pitted farmers against environmentalists across Europe in recent years.

“The tendency is towards more and more restrictions, a hardening of regulations on products at the European level,” said Nicolas Rialland of the General Confederation of Beet Growers.

According to Mr Rialland, more than a third of the French land under beet has been affected by yellowing this year, reducing yields by an average of 40 per cent, and cutting the crop — which last year was 38m tonnes — by more than 5m tonnes, equivalent to 900,000 tonnes of sugar.

The worst-affected among the 25,000 French farmers who grow beet are expecting to lose 70 per cent of their output. “We have a sector that is on its knees, that is very weakened,” he said.

The fact that long-term climate change is blamed for this year’s severe outbreak of disease — a very warm winter allowed the aphids to thrive early in the season — does not help the government’s argument that the reversal of the neonicotinoid ban is a temporary measure to deal with exceptional circumstances.

France’s draft law invokes an exemption in EU regulations allowing a member state to authorise limited use of a banned product for 120 days “in the face of a danger that cannot be controlled by other reasonable means”. Ten other EU member states have also used the exemption. 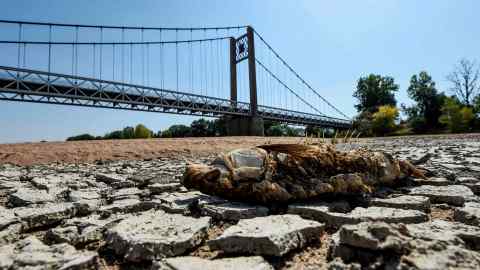 Environmentalists argue that farmers will have to find alternatives to neonicotinoids and change their farming practices given that warm winters are likely to continue.

“We have to stop thinking it’s a temporary phenomenon,” said Ms Batho, arguing that the real economic pressure on beet farmers and the sugar industry was caused not by aphids but by the elimination of protectionist EU national production quotas in 2017, which boosted global production and forced down prices.

Barbara Pompili, French environment minister who helped promote the original neonicotinoid ban as biodiversity minister in the previous government, has defended the U-turn as essential to save the national sugar industry, but admitted “it was a difficult decision to take”.

Opponents of the new policy complain that the government has not even restricted the possible neonicotinoid exemptions to the beet farmers who say they need it to save the French sugar industry.

“Now the producers of corn and wheat are demanding exemptions too,” said Matthieu Orphelin, co-chair of a political group called Ecologie Démocratie Solidarité that in May split from Mr Macron’s governing La République en Marche.

A lawyer for alleged victims of Robert Hadden, a former New York gynecologist accused of sexually abusing patients for 2 decades says the case is 'just getting started'