As the international community is consumed by the impact of Covid-19, there are signs of the impact of the pandemic on the body politic. There is change throughout the international community, particularly the decline of the influence and power of the United States; the fragmentation of the European Community; the weakening of the transatlantic system; the increased influence of China; and the dire impact on Third World countries and their refugee problems. At home, the Trump administration’s “destruction of the administrative state” has made the battle against the virus far more difficult.

The United States. A time that calls for global leadership and international assistance finds the United States rejecting international diplomacy and foreign aid in an “America First” policy that is doing great harm. Since the end of the Second World War, the United States has typically led the international community and its key institutions, particularly at times of crisis. The Trump administration’s hollowing out of the U.S. institutions of governance as well as  Donald Trump’s “America First” policy set the stage for the failure to respond effectively to the coronavirus at home and abroad.

Trump’s immediate predecessors did better.  President George W. Bush mismanaged the Iraq War but handled the AIDs crisis in Africa effectively; President Barack Obama successfully managed both the financial crisis and the Ebola outbreak.  Now the United States is paying the price of Trump’s denial of science, his campaign against public service, and his ultra-nationalism, which have compromised the global role of the United States.

The lack of respect for science by both Donald Trump and Mike Pence is directly related to the denial of the climate crisis, which in turn explains the dismissive attitude toward the pandemic in the crucial months of January and February, when the White House received dire forecasts from both the intelligence community and the health care bureaucracy.  Both the United States and South Korea suffered their first cases of Covid-19 on January 20: South Korea immediately turned to testing, contact tracing, and isolation; the Trump administration dragged its heels on all of these measures and still lacks a federal policy for the logistics and supply role that is essential.  Domestic governance, once a strong suit in the U.S. hand, has been severely compromised by Trump’s war on civil service.

The European Community.  The pandemic has clearly exacerbated the North/South and East/West fault lines of a European Union that is still dealing with the divisive problems of Brexit and the refugee crisis.  The prosperous states of northern Europe, led by the Netherlands, are questioning the provision of financial assistance to the struggling states of southern Europe, particularly Italy, Portugal, and Spain.  The East/West divide is also worsening as key East European leaders, such as Hungary’s Viktor Orban and Poland’s Andrzej Duda, are using the pandemic to gain extra-parliamentary powers.  The western nations of the EU have condemned the violations of the rule of law in the eastern nations, and there have been calls for expelling Orban’s ruling Fidesz Party from Europe’s largest umbrella political group, the European People’s Party.

Orban has been a particular problem for the EU, having obtained parliamentary approval to rule by decree for as long as he sees fit and, as a result, may see an end to the billions of Euros that Hungary receives under the EU’s budget.  Hungary as well as Poland and the Czech Republic have been cited by the European Court of Justice for refusing to accept their fair share of refugees during the refugee crisis of 2015.  Orban blocked the EU program to resettle migrants from Muslim nations in Africa and the Middle East, arguing that he wanted to “keep Europe Christian.”  The refugee crisis exacerbated the rise of the far right throughout Europe, which has weakened the political center in the East and West, particularly in Germany.

Meanwhile, the North Atlantic Treaty Organization, which has its own East/West divide due to the radical differences between member states regarding policy toward Russia and the proper level of defense spending, issued a boilerplate declaration on April 2 that declared its “ability to conduct operations and assure deterrence against all the threats we face is unimpaired.”  This ostrich-like statement ignored the fact that the pandemic has already affected  the conduct of military exercises, and threatens large-scale deployments the world over.

The Pentagon, for example, failed to respond initially to a viral outbreak on one of its (obsolescent?) aircraft carriers because it didn’t want to concede the impact of the pandemic on readiness.  It fired the captain of the carrier who wanted to address the Covid-19 crisis because the military leadership believed he embarrassed the president of the United States.  Unfortunately, the Washington Post explicitly endorsed the Pentagon’s position on April 4, when it agreed that the consequences of taking a carrier “offline—especially a ship assigned…to check China’s military power—would be enormous.”  In actual fact, the Chinese have developed cruise missiles that would compromise the ability of U.S. aircraft carriers to target mainland China.

China.  Although China contributed to the spread of the virus by denying and suppressing data in December and early January, the Beijing government pursued an aggressive containment policy that dealt effectively with the crisis.  The outbreak of the virus in Wuhan started as China’s “Chernobyl,” but Beijing gained international attention and recognition by eventually offering expertise and assistance on a global basis, particularly to Italy, which has been ignored by its European neighbors.  Chinese test kits and masks have been made available to the United States as well as to nations in Africa and Latin America.

Throughout the Third World, there has been a high-level discussion of China’s authoritarian model as an effective system for dealing with pandemics.  Meanwhile, authoritarian leaders in China and elsewhere, including the United States and Israel, are exploiting the pandemic in order to expand their political powers.

China is taking advantage of a divided European community and a weakened United States to advance its international position.  Unlike the United States, China has avoided contentious disputes in various geopolitical regions, particularly the Middle East, which has become Washington’s briar patch.  Xi has created a solid state-to-state relationship with Russia and is not seeking a strategic confrontation with the United States.  The phone conversation between Trump and Xi on April 2 has led to a reduction in polemics between the two states, indicating that both leaders realize the need to concentrate on their domestic problems.  Ultimately, however, Xi may face domestic pressures at home because of the economic and social consequences of the pandemic.

The refugee crisis is a particular problem for the weaker economies in the Third World. There are 12 million refugees in the Middle East from Iraq, Syria, Lebanon, and Turkey. Half the population of Syria is in a refugee or displaced status; Iran, which may be responsible for the majority of Covid-19 cases in the Middle East, is housing several million refugees from Afghanistan. The refugee crisis in Africa, which numbers more than 17 million displaced individuals and six million refugees, affects the entire continent as well as southern Europe.  The Greek economy cannot deal with even the relatively small number of refugees from the Middle East and Southwest Asia, who are trapped on islands in the Aegean.

As the strongest economic and military power in the global economy, the performance of the United States in dealing with the pandemic has been shockingly inept and even unconscionable.  American politicians and pundits have regularly attributed the collapse of the Soviet Union to a strategic collapse marked by a ruinous arms race; an unaffordable global presence; and a moribund economic and social system.  Ironically, the United States now finds itself in an arms race with itself; a global military footprint that no longer serves strategic interests; and a level of social and economic inequality that is unmatched in the global community.  Like the former Soviet Union, the United States is currently confronting a public phenomenon of cynicism toward government as U.S. leadership is no longer credible.

Sat Apr 18 , 2020
Two political scientists from Harvard University have identified four warning signs that indicate if someone poses a dangerous authoritarian risk to a nation. No U.S. politician, at least dating back to the Civil War, has come close to ticking off all four boxes, one of the authors told Newsweek—until Donald […] 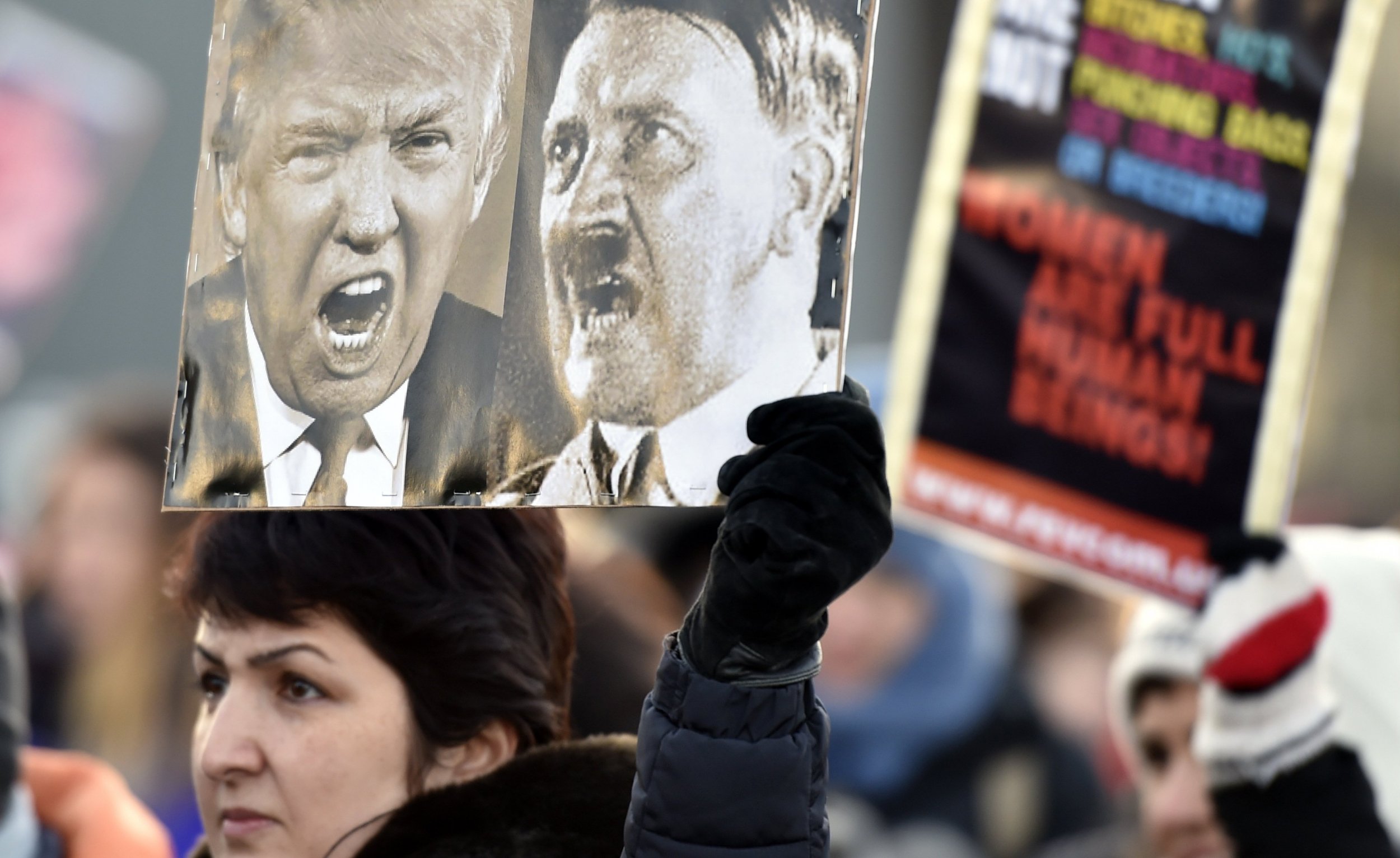